Once upon a time, Alex and I went to Japan – it was our first visit.  The whole adventure had been in planning  long in advance: an ambitious journey covering two thousand kilometers from Tokyo to Kyushu and back again.

The trip turned out everything we wanted it to be: pure magic.

We loved it all; the old and the new, the modern and the traditional, the people, the food, the feel of the place, the mystery. In short, we were both quite overwhelmed by the dream-like state we were experiencing while roaming through the fragile, never-ending, enduring beauty of Japan.

One of our Top Must See Places was Koyasan, a tiny cluster of monasteries lost in the mountains of Northern Wakayama. A monk called Kukei had first brought Buddhist Shingon doctrine to Japan many years past and had settled its original headquarters on Mount Koya. He was also buried there in a mausoleum of Kukei, surrounded by the largest graveyard in Japan, Okunoin, where many Japanese people dream of being buried.

We arrived at Koyasan early in the morning, dumped our bags in a Monastery that we were staying in overnight, and set out to explore the place. We spent a wondrous day on our feet trudging through Koyasan’s cluttered streets, admiring its tranquil beauty, trying to catch perhaps a little glimpse, no matter how small an insight, into its eternal wisdom buried under the transient layers of time. We decided that we’d visit Okunoin after dinner which would be served quite early, as was the custom at the monastery. The cemetery was just a few steps away from our lodgings and we had a couple of hours between the meal and the curfew imposed by the monks on their guests.

By the time we were stepping through the cemetery’s gates the bright and cheerful spring day was turning into a quiet, serene evening, dazzlingly boosted by a spectacular crimson sunset that served to enhance the beautifully kept lanes of the Buddhist resting grounds. Shingon Buddhists believe that there are no dead in Okunoin – there are only waiting spirits, but who knows what they are waiting for.

We walked slowly through the silent alleys, soothed by flickering lights emanating from stone lanterns, which decorate nearly every tombstone. According to legend, some of these lanterns have never been extinguished since they were lit six hundred years ago. There were hardly any visitors beside us and as the sun was finally losing its battle against the night; Okunoin’s eerie alleys were becoming more and more beautiful, the gathering dark adding poignant mystery to the implacable stone Buddhas standing vigilant guard over eternity.

After a while it occurred to both of us that perhaps we ought to be starting back to our cozy little room in the monastery if we didn’t want to spend the night outside locked gates!

As soon as we decided that it was time to head back, we stopped, looked around and realized that we were somewhat lost and that neither of us had a clue as to which alley to turn into next!  Another alarming discovery was that aside from the stone faced Buddhas lining up both sides of the alley there was not a soul in sight whom we could ask for directions. Determined not to panic we first verified that we still had a good half an hour to get back to our friendly monks and then tried to somehow backtrack our steps to the entry gates. We strained to stay calm and were quietly discussing our predicament, when suddenly we both heard the faint sounds of a jazzy tune, as if coming from an old-fashioned transistor radio.

It was barely audible at first but gradually gained in volume and strength as if somebody was coming slowly towards us. We turned in the direction that the music was coming from and, indeed, almost immediately we could discern a diminutive figure moving unhurriedly towards the spot we were standing at.  The dwarfish creature was walking with a pronounced limp and looked even smaller due to its bent forward posture: a straw hat hid his head; he had a big broom in one hand and a tiny transistor radio playing jazz, which sounded like something out of a Second World War movie.  He looked strange to say the least, but he could easily have been one of the Okunoin gardeners.

He was hobbling along ignoring us altogether, as if we were not there, as if we did not exist,  which was somewhat demoralizing. However, we were quite determined to sleep in our beds that night, and there were two of us! So, we rushed up to him and attempted to ask directions to the exit in whatever Japanese we could scrape up between us.

When finally the man decided to notice us he seemed rather put out: he first tried to hunch his shoulders even more, pulling his straw hat lower over his brow, but after a moment’s reflection he evidently changed his mind. The hat dipped and slowly went up and, at that very instant he happened to walk into the light from a lamp post. Suddenly, we were able to see him properly for the first time.

I saw his hands.

His fingers ended in claws instead of fingernails.  As he began to raise his head his whole posture started to shift and change: he gradually grew in stature and height … Now he definitely was looming over us. Still, it was nothing compared to the two charcoals smoldering maliciously inside his eyeballs, a temporary glow with a full promise of an all-consuming, relentless fire. A vague thought of Oni, guardian demons of Japan fleeted somewhere in the back of my head. There was no escape.

He glared thus at us. We burned for an eternity.

Then he let out a long and heavy sigh, almost a growl, ever so slowly turned away and pointed a crooked claw towards an alley at the end of which the exit gates were clearly outlined against silvery moonlight.

Discovering we still had legs we hurried in the direction he was pointing, mumbling a humble “Arigato”.

Going past him with my eyes firmly lowered to the ground, I clearly heard a measured whisper in perfect English:

We did look back at the gates:  there was just a shadow, a rapidly fading memory of a hunched diminutive figure hobbling into the dark. 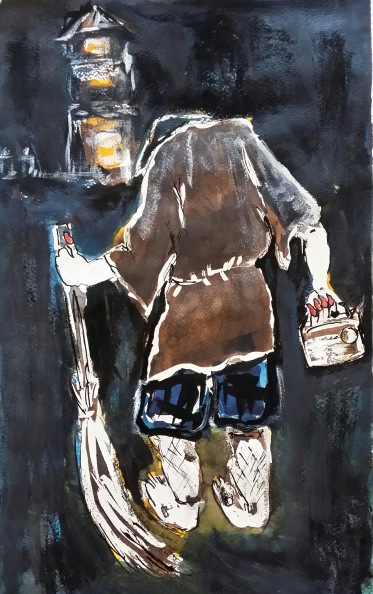