I am a person of habit and every morning I follow the same routine. I switch the coffee machine by the kitchen window on,  turn away from it just for a fraction of a second to get a mug from the nearby cupboard, and, at that very instant, every time without a fail, the same peculiar incident takes place: out of the corner of my eye, I catch a movement behind the window, the almost imperceptible shadow of an odd figure silently passing by outside.

Now, I live in a tiny village in the middle of nowhere and my kitchen window looks over the garden and a path leading to the gate, so the chances of anybody walking past my window at that hour, including the postman (who never stoops so low as to deliver our mail before midday), would be at the very least small.

When I had my first glimpse of the moving figure weeks ago, I first dismissed it as a flight of fancy.

Then it happened again.

Every time I would turn my head away from the window, that figure would be there, swiftly gliding away, refusing any clear definition. I could not even decide whether it was a man or a woman. It remained there only for an infinitesimally small amount of time, but it was there every time without fail.

Still, I probably would not have given it a second thought, had it not recently begun to gain a little substance with each of its new appearances. Also, I was getting an eerie feeling that the speeding figure was starting to turn its head towards me. It was somewhat unnerving.

I did not feel like talking about it to anybody: I was pretty sure that people would just laugh at me, or think me peculiar or down right crazy. However, I had to do something about that figure; I had to capture it, to stop it from moving, if only for an instant. Its intangibility was driving me nuts.

I decided to try to trick it: I put my mug by the coffee machine the night before, so as not to have to turn towards the cupboard and in the morning, I bent my head down but kept a steady gaze on the window. Naturally, I saw nothing at all until the minute that I turned away to sit down at the breakfast bar and, like clockwork, the figure was there, in the corner of my eye while I was turning.

Next time I drank my coffee standing by the window and pretending that I was not looking. I caught the same familiar hallucination the minute that I finished my breakfast and gave up stalking ghosts to walk away from the kitchen.

Then I changed tactics and tried to look solely at the window whenever I happened to be in the kitchen. The only thing visible to me was the garden, the path and the gate, until such a time when my attention slipped, or I had to blink, and there it would be, the same infuriating ghostly character: a little bit more defined, a little bit more tangible every time, and every time its head turned slightly more towards me.

I’d had enough: I became fed up, irritable, frustrated and tired.  I decided that I was imagining the whole thing. I had wasted enough of my time on a non-existent ghost story. I decided it was high time to put the whole nonsense out of my head.

It is morning, once again. And as my habit goes, I get up, go to the kitchen, switch on the coffee machine, and start turning towards the cupboard to get my favourite mug. Little by little, I become aware of a quiet yet persistent and at the same time rather unpleasant noise, as if somebody is scratching on glass, and out of the corner of my eye I see a hideous, obscene face grinning madly at me through the kitchen windowpane. It has leathery shrivelled skin, a scowling sunk-in mouth with dried up spittle stuck in its corners, and a long, hooked nose reaching down to what might be described as the lack of an upper lip, followed by the foulest imaginable wart hanging on a sharp sticking out chin: the face made ugly not only by its loathsome features but by the complete and unconditional evil leaking through its ageless eyes. I realise that I have seen that face before – I just cannot remember where or when. This time my eye is frozen and I cannot move it anymore, it is glued to the corner of its socket and to the horrid vision in the window.

My whole body is paralysed with fear and the feeling of total dread and absolute helplessness robs me of being myself. I am incapable of thinking rationally, of reasoning, of trying to understand. The figure is scratching the window with an explicit order to be let in. That grazing noise completes the utter dread I am experiencing and makes me remember…

I remember that the figure and the face belong to the nightmare I recurrently had as a child and the very instant I remember, the scratching on the window turns into a hoarse barely audible whisper inside my head, a whisper that terrifies me more than a scream would:

“Yes! I am indeed the true nightmare of your dreams and you can stay with me forever, because you do want to find out what can be seen out of the corner of your eye … because even now you still are dying to know what lives under your bed.”

I am so scared now that both of my eyes shut in terror.

When I open them again, the only things that I see in the window are the garden and the path leading to the gate.

I turn away, and, facing the room, make myself a cup of tea. 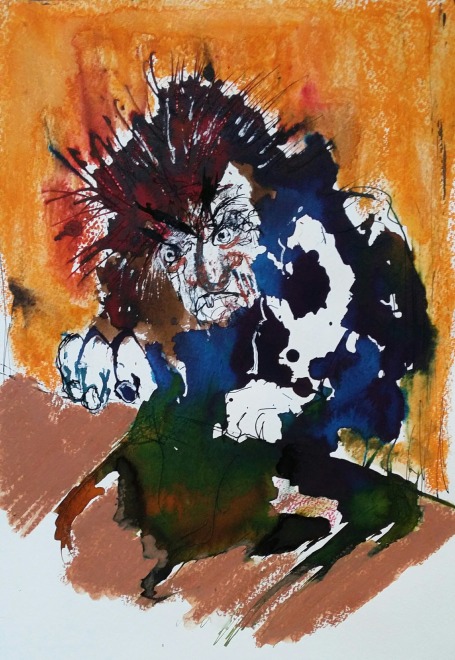