It was a perfect Greek holiday with the blue-blue sea, the luminous sky and the sun so hot it made sure you went for regular swims. We had luck in securing a small villa which garden path led directly to a secluded little beach unfrequented by the main stream of holiday makers.  There were deck chairs and umbrellas to rent and a tiny café run by a welcoming elderly couple of friendly locals who were only too happy to help us circumvent the boredom of either shopping for or cooking lunches. In short, it was Paradise!

Entertainment was sparse, so every morning I watched four elderly women accompanied by a man of equally advanced years stroll daintily close to the waterline, undress and walk decisively into the sea. Every morning I saw them wading out until the water would reach up to their chests, then forming a close ring around the man who would promptly begin lecturing them. He sounded authoritative, bordering on angry. The four ladies never asked any questions; they looked quiet, placid and subdued. None of them moved once, or, may be none of them dared to move, considering how angry their lecturer appeared. They would stay like that for about half an hour after which they would walk out, get dressed and quietly walk away.

I hardly noticed them in the first days of our stay: they were part of a local magic holiday set up, they looked eccentric, spoke in a foreign language and aside from being rather old and in a group, did not invite much pondering about. They were there the next day without a fail providing grounds for making jokes about exercise and their strict and angry teacher.

Eventually, they became a fixture in my morning routine, so when one morning I came out for my first swim of the day, I was rather disappointed to see only three of the old dearies standing around their lecturing master.  However, I did not give it much thought and probably would have forgotten about it altogether, except that the next day there were only two of them left.

By now my curiosity was up and I have played a few morbid scenarios in my holiday head.  Then the next morning, as if following one of my own horror scripts, there appeared the angry bloke with only one docile grandma in tow: their routine did not change a bit – they took off their clothes, folded them neatly and carefully laid them down on the sand and slowly waded into the sea up to their chests. They stayed in the water thus, he delivered his angry rhetoric which as expected took about half an hour, and then they walked out back to the beach, got dressed and slowly walked away.  The two of them acted exactly in the same fashion as on all the previous mornings with one exception: just before they stood up to leave, the old woman half turned towards me and gave me an almost imperceptible nod and a faint twitch of a hand, as if saying goodbye …

Five minutes later I was convinced I have dreamt it all up in the sun heat.

Imagine my surprise a couple days later when I saw the by now familiar man leading a party of four elderly ladies to the water edge! I could not say I remembered exactly what the previous lot looked like, but I could swear on anything they were not the same batch as before! Also, there was something ominously wrong in the way, the man looked the same, just as angry as before while the women were just as elderly and as placid as the ones before them, the way the whole sequel of the morning routine was repeated to a ‘T.

Later that evening I could not sleep, so I decided that I would go out, sit by the sea, watch the stars and the moon, listen to the night. When I got to the darkened beach I was somewhat miffed for I realized I was not the only insomniac that night. A solitary figure was sitting on a sunbed by the waterline, smoking, silhouetted against the silvery moon path reflected in the sea. I did not want to intrude but the shape turned to me, and said “Good evening!” politely. I was taken aback for I recognized immediately the man who brought the old grandmas to the beach every morning.

“Hello” – I mumbled back and he offered me a cigarette which I declined as I did not smoke.

The Moon was full that night and there were plenty of stars and now that my eyes were used to the absence of artificial lights, a could see clearly that the man was actually smiling: he was not smiling at me – he was smiling at some  internal happiness which was filling him up to the brim, which he could not contain within himself: he was bursting with it, it was simply spilling over and I saw how that smile totally transformed the man’s face and I could not understand whatever made me think that he was old, grumpy and ugly. He was the best-looking man I have ever stood next to in my entire life! He looked like a prince from a fairy tale should look …

“Why aren’t you asleep? Are you upset?” asked me the man and then he looked at me closely and a frown of recognition had passed briefly through his perfect features: –

“Ah! – I bet you are wondering about those old ladies I bring every day to the beach …”

“Could you tell me about them? I do not understand Greek, but it was pretty obvious that you were telling them off!”

“It was not Greek – it was Danish! Old Danish …” – said the man. He then patted the sunbed next to himself, and I had no option but to sit down – he was just too incredibly good-looking to refuse!

He turned his gaze back towards the sea and the moon path, still breaming with that inner happiness and joy:

“When you were little did your Mother read you the “Little Mermaid “story by Hans Christian Andersen?”

“Yes … and I am glad that I have heard it before the Disney version with its sickly-sweet happy ending when they all marry each other.  Although I did think it was terribly sad and unfair: in the story my Mum red to me the little mermaid did not marry her prince, refused to murder him, fell into the water to become foam and instead was granted the so-called grace of joining the “daughters of air” to provide the service for 300 hundred years of good deeds in order to obtain the immortal soul!  Just because she fell in love with a jerk!”

By now I was brimming with genuine indignation on behalf of the poor slighted little mermaid.

“How absolutely right you are! He is such a pathetic jerk! I can assure you he has regretted the whole sad experience bitterly ever since!”

A thought struck me at that point about how strange our discussion was, how bizarre the man’s choice of phrases and tenses. He lit another cigarette.

“Unfortunately, that is not exactly the whole picture of what the author had in store for them all!”

He was staring at the sea and the moon path, lost in his own memories:

“All depended on whether the little children for whom the story had been written were good or bad: if one was good, a year of service was to be taken off. But if a child was bad and wept, as all children do sooner or later, a day was added for every tear they shed!”

“But the worst thing is that once a story has been conceived and laid out inside the author’s head its ending can never be changed, even if you publish it with an alternative finish. Andersen knew exactly which ending was meant to be for that tale.”

He took a long drag on his cigarette and looked directly into my eyes:

He finished his cigarette, stood up and left.

I sat there for a while. The sea was very calm, the full moon very bright against the dark, velvety sky – it had painted a wide silvery road onto the inky surface of he sea on which I could barely make out a splash of tail…

Andersen is a cruel God! 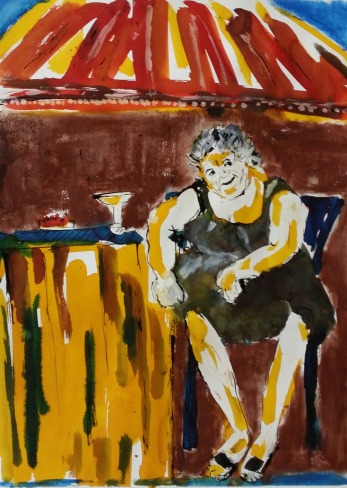 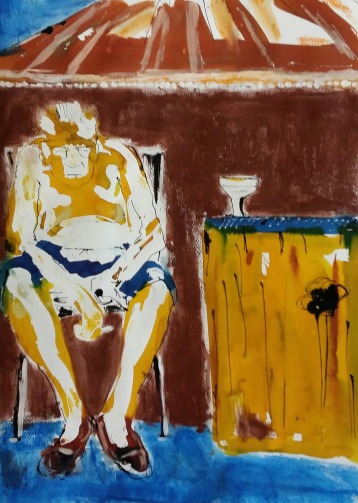